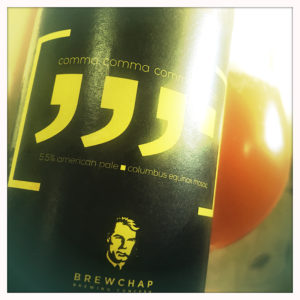 [,,,.] (Comma Comma Comma Full Stop) is an American Pale Ale with Columbus, Equinox and Mosaic hops, and it’s yet another example of Ian’s skill as a home brewer.
It’s a cloudy pale gold beer with a silly name and an aroma full of Fruit Salad chewy sweets.
Glugging a mouthful you’re met by a little woody tobacco wrapped around some fresh herbal leaves and a great big glob of bitter orange marmalade.
It’s a big hoppy delight and it’s underpinned by some seriously sexy sticky caramel and shortcake malts, that add some much needed brown sugar sweetness to the body of the beer before you head into the bright and crisp bitter finish.