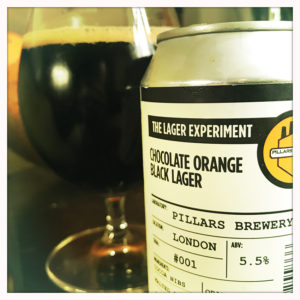 Pillars of London are on a mission to make Lagered beer in interesting and creative ways and this, their Black Lager brewed with cocoa nibs and orange peel is certainly both.
The beer pours like a creamy Stout which shouldn’t be surprising as everything about it except the long cold fermentation is a Stout, and I made the mistake with my first can of chilling it as I would a Pale Lagered beer which meant I missed a lot of the action.
This can though, I initially chilled but have let warm a little in my glass and the result is a rich bitter chocolate bodied drink with lots of sweet treacle tart, pecans and honey, the orange peel adding a a little piquant zesty hit to the finish.
What the long slow maturation does here is to make the beer feel soft and smooth and round, nothing jumps out and slaps you, instead everything is gentle and luxurious.
Very good.