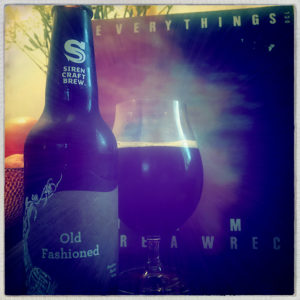 Barley Wine is pretty much my least favourite beer style, for me it is simply too sweet.
But here, cloaked in the damp wood of a year in a Bourbon Barrel, I’m more than happy to keep on swigging.
That rum and raisin, brown sugar syrup and thick honey sweetness is there along with a bowl full of treacle tart, pecans and walnuts, and there’s even a hint of chocolate and brown bread.
There’s no point looking for hops as you won’t find any and so the beer starts to build a sickly sweetness, and that’s usually where my interest in Barley Wine ends, but here the mix of chest warming booze and damp and oaky Cola and prunes keeps me drinking.
Yes it’s sweet, but there’s so much more going on and I like it very much.