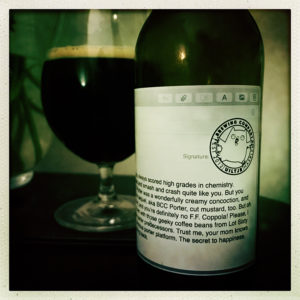 Some beers are so far ahead of everything else that I don’t quite understand what’s happening.
This, Uiltje’s Coffee and Coconut Porter is one of those beers.
There’s nothing initially that made me think I was in for anything other than a well made Porter, it poured a dark inky blue brown and smelled of coffee and cherries.
But when I took a swig everything changed.
In fact, I was planning on not writing anything about this beer, I thought I’d open something decent but standard and just enjoy it quietly.
That first mouthful changed my mind and made me write what you’re now reading.
Yes, there’s all the stuff you’d expect from a well made Porter, chocolate and treacle tart, coffee and plums and a snap of herbal hoppy greenery, but here the coffee, which itself is already fresh and woody, fruity and almost smoky is raised to a new height by the creaminess of the coconut that brings a vanilla roundness and a thick creamy body so delightful I thought there must be some lactose at play.
But no, this is just an excellent beer that you really need to try.