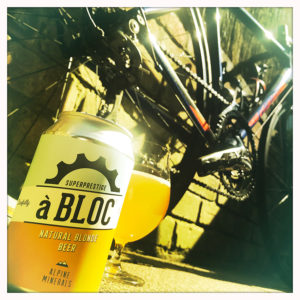 Contract brewed by Ramsgate Brewery who I like very much, this is a decent little Blonde beer, though I’m not sure what the added Alpine minerals, um, add.
In fact we’re not even told what the added Alpine minerals are, a visit to their website tells me that they’re good for cyclists for a host of reasons but stop at the point of pointing out just what minerals I’m ingesting.
I’m a keen, almost obsessed cyclist, clocking up over 5,000 miles in the first twelve months of owning my favourite bike, Sylvia (pictured), and so having beer brewed for cyclists interests me a lot.
And this beer is actually very good indeed.
Crisp and light, its malts are all sticky honey and French bread crusts, and there’s a sharp spiky lick of herbal hedgerow hops, while the yeast adds a hint of salty earthiness.
it’s a clean and refreshing beer and I’d happily drink it regularly – especially after a bike ride – but I’d be really interested to know exactly what minerals have been added to what i’m drinking.