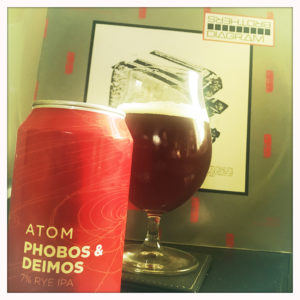 You know my love for a beer brewed with Rye, it’s a love that made me rather excited when I saw this, Atom’s Rye IPA, in my local Asda.
But sadly I was to be very disappointed as there’s a really unpleasant sweaty chemical tinge bubbling away underneath the toffee biscuit and honey of the malting, the rye adding its earthy spice to the edges, while the hops just aren’t anywhere near big enough for an IPA of this ABV.
They give a little lemon zest and orange marmalade, and maybe even a light slap of pithy mown lawns, but they’re just not powerful enough to stand up to the weight of the sweet malting, the alcohol heat and that chemical cleaner thing that lurks in both the aroma and the flavour.
It almost spoiled my beloved Diagram Brothers LP.
Almost.