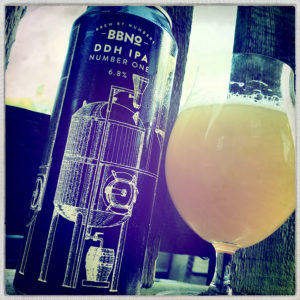 This beer, 65|01 to give it its proper Brew By Numbers name, doesn’t half pour a weirdly pale cloudy yellow.
In fact it’s bordering on a pale cream colour, and the aroma, which has lots of lemonade and apricots, is tinged with a not altogether pleasant petrol or vaseline smell.
Taking a swig you find lots and lots of lemon sherbet and lime leaves, grapefruit zest and woody rolling tobacco, but it’s a bit of a struggle to get hold of the malts, which are so light as to be almost indistinguishable save for the heavily creamy body that all the oats give it.
The result is a beer that, for my taste at least, is really out of balance, it needs some round sweetness in its body rather than just the oaty porridge that does its job making the beer feel thick, but leaves the finish feeling very harsh indeed.