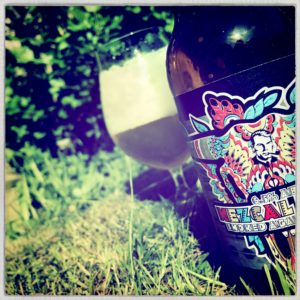 Our Ian really likes making beer.
He’s damned good at it as well.
Mezcalhead is a Smoked Agave Saison that came with a warning that told me, “it’s a bit feisty, so pour it carefully.”
And so I did and the warning was right.
I managed to get a big frothy grannies’ hairdo of a head on the beer and sniffed away at the lovely honey and lightly smoked fruity aroma.
Once the bubbles had settled down a bit a took a gulp and found a super caramel and honey, toffee and brioche malt base and the earthy lick of spicy Saison yeast.
The hopping is bright and sharp and fresh, with garden herbs and lemonade, while the Agave adds a gentle smokiness and a soft and round fleshy underbelly.
Super, but boy is it feisty.