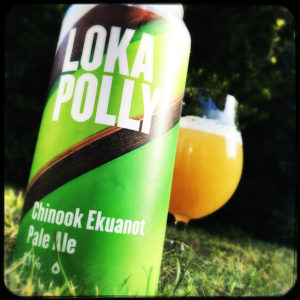 A month or two ago I had my first taste of Loka Polly beer and immediately contacted them to invite them for an interview.
It’s still in the pipeline and will happen soon.
You see, I tasted something in that first beer that was exciting and interesting, beer made superbly well and presented beautifully.
And here, with their Chinook and Ekuanot driven Pale Ale, only the second beer I’ve had from them, I’m absolutely sure that I need to spend some time talking to them about what they do.
This is a superb Pale Ale that’s fresh and zingy with lime zest and orange juice, kiwi, peach and mown lawns from the hops, all of which is underpinned by a delightfully light yet solid honey, brown sugar, shortcake and brioche malting.
All this from a beer that pours an invitingly cloudy pale peach and smells of freshly made lime cordial.
There’ll be a Loka Polly article coming soon.