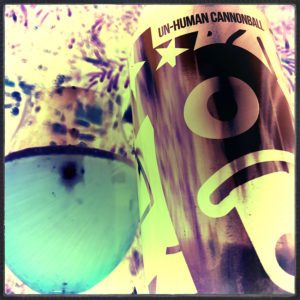 Do you like Roald Dahl?
How about hallucinogens?
You see, the 2018 version of Un-Human Cannonball, packed as it is with Cryo Hops and voodoo is ridiculous and trippy and altogether otherworldy.
It begins with a peach so big that James could climb inside with his insectoid friends, the centipede and the ladybird gorged on LSD and out for fun.
It’s Captain Beefheart as beer, almost painful but achingly cool, zapping your synapses while making some weird kind of sense.
There’s that enormous peach front and centre, hollowed out so you can get to the stone, where you find pecan pie and toffee brioche from the malts, an enormous hit of blood thinning, heart racing alcohol that’s tantamount to sniffing brandy, followed by the majestic ringing and singing of Amarillo, CTZ, Mosaic and Simcoe (Cryo, of course) that slip their hands into your pants while licking your face with melon and cucumber, peach, apricot and rolling tobacco, so you don’t realise that the T90 Amarillo, CTA and Simcoe are binding your tastebuds with pine resin, balsa, lemon bonbons and orange marmalade.
Three or four swigs in you’re down the rabbit hole and hoping for a little bottle that’ll make you tall as you crumple towards the floor in otherworldy abandon.
It’s Matilda’s magic finger turnign you into a drunk, Charlie’s Chocolate Factory overrun by alcoholics, and The Twits getting twatted.
It’s a good job that Magic Rock only do this once a year because I’m not sure I could stand the ride more often than that.