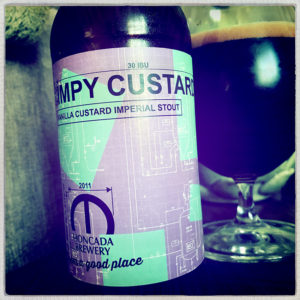 There’s no lactose listed in the ingredients of this beer and yet it tastes and feels like something big and creamy is going on in the dark depths of this inky black beer with its coy little cappuccino head.
The aroma is, nothing more or less than the custard side of a rhubarb and custard sweet.
Remember them?
And that’s the vanilla custard flavour that runs throughout the beer.
It’s surrounded on all sides by deep fruity coffee, treacle tart and honey, burned wholemeal toast and pecan pie from the twelve (count them) malts, and the Chinook hops adds some rolling tobacco woodiness and a lick of lemon sherbet.
Then there’s the sugary rum booziness of the big alcohol hit that moves the beer along as you head towards the sticky toffee finish.
And all the while that childhood custard sweetie taste rumbles away making me want to try a version of this with added rhubarb for that playground flavour of my childhood.