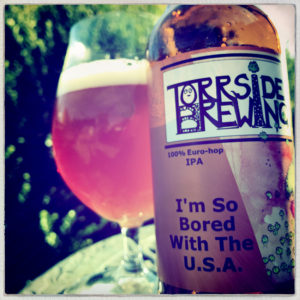 I’ve been getting a bit bored of NEIPAs.
There, I’ve said it.
Pete Brown said it far better and in much more detail recently (though I currently can’t find a link to it), but it seems that you can’t turn for another creamy and cloudy IPA with that good old New England flavour.
And so finding that Torrside have made a super IPA using only European hops made me rather happy.
There’s a solid toffee and biscuit, honey and shortcake malt body which is cut through by hedgerow greenery, lemon zest and orange marmalade, a hint of aniseed and a touch of mint.
It’s sharp and fresh with a delightfully long dry finish.