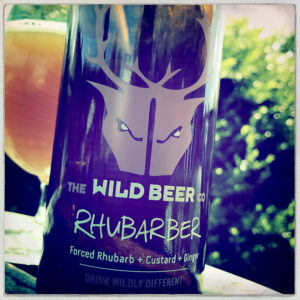 There comes a point at times when it becomes impossible to tell if what you’re drinking is beer.
I mean, I know it is, it’s been brewed with malt and hops and undergone all the right things, but Rhubarber bears no relation to anything specifically “Beery”.
I suppose that it all depends on where you draw your definitions from, and I actually like this beer very much indeed.
It’s a dense and cloudy drink that smells of sugared rhubarb and taking a swig there’s a light juicy rhubarb body that’s tinged with spicy ginger and a thick vanilla creaminess.
But there’s no malt or hop flavours as such, just a bright fruitiness and a thick buttery body.
It’s beer, just not how you’d imagine.