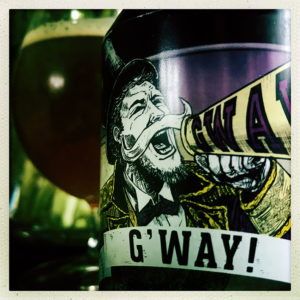 Well now, this is a big malty thing.
I don’t know about an IPA, G’Way is far more like some weird alcohol fuelled muscular Best Bitter, pouring as it does a dark orange and smelling of caramel and apricots.
Taking a swig there’s a great big malt thing that’s not so much lurking in the corner as standing in front of the door and making you shove your way past it.
You find honey and toffee, digestive biscuits, brioche and a little smack of salty yeast.
And then, where there should be a big IPA blast of hops there’s, well, nothing really to note.
A little bit of lemon zest and a suggestion of mown lawns, an apology for hedgerow greenery and a whisper of tobacco, all of which is pushed forward by a round brandy booze that adds to the sweet treacle tart body and the sugary finish.
Yup, this is Imperial Best Bitter rather than IPA.