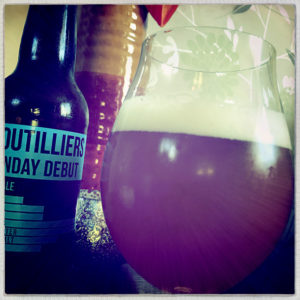 Sunday Debut is a Pale Ale brewed with Waimea and Target hops, Maris Otter, Wheat and Oats and, most importantly for me, Rye.
You see, I never ever get bored of telling you how much I love Rye in beer.
So let me break down Sunday Debut for you.
The Target and Waimea are an interesting blend, giving you some very traditional aniseed and hedgerow, dandelion and nettle tea flavours along with some more modern citrus flavours, lemon zest and fleshy mango, while the yeast adds a fruity spiced fug.
The malting would be all about a creamy ice cream cornet, caramel and runny honey lightness if it weren’t for the sexy, almost dirty woody spiced hit of the rye.
Boutilliers’ Sunday Debut is very good indeed.