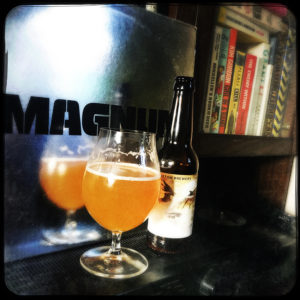 As soon as I saw the label and the name of this beer I just knew I had to put some New Wave Of British Prog Metal on, and there’s no one better than Magnum for that particular metal niche.
The album I chose even comes wrapped in a shiny metallic sleeve and has songs called things like “Great Adventure” and “If I Could Live Forever”.
It’s overblown and pompous, self important and silly, but it rocks in a slightly camp British Metal way.
King Slayer, on the other hand, though carrying a name and a label that says, “Rock!” is Buxton doing their thing and doing it well.
This is a Double IPA packed with peachy fuzz and apricots, steely herbal leaves and mandarins.
There’s also a little woody tobacco and a hint of fence posts while the malts are caramel wafers and salted brioche.
And not a studded wrist band in sight.