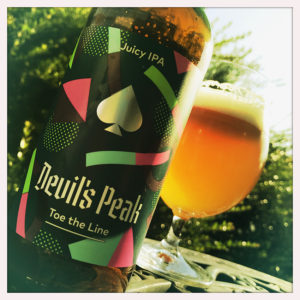 OK, so Devil’s Peak of South Africa are now contract brewing in the UK at Fierce Beer.
Moreover, if this, their “Juicy IPA”, is anything to go by then I’m rather pleased to see them following the lead of folk like Yeastie Boys and getting their beer made and sold over here.
Toe The Line is indeed rather juicy, from its lemon and nectarine aroma to its sharp bright slap of lemonade and mango, lime zest and sticky orange marmalade.
This is underpinned by a solid brown sugar syrup and shortbread malt that adds a round sweetness to the body of the beer.
I’ll be very interested to see what else Devil’s Peak can offer us now they have a local base.