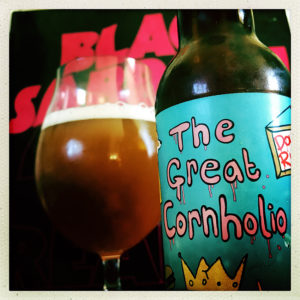 Yes I know it’s a Monday night, but I’m listening to Black Sabbath and so something Beavis & Butthead related seemed the natural choice.
The Great Cornholio is a Double Rye IPA and it’s the best Tiny Rebel beer I’ve had for some time, but then I’m a sucker for rye and a high ABV.
Even on a Monday night, though I may regret it in the morning.
The rich orange coloured beer smells of boozy peach and apricot flan, its fuzzy head fizzing and popping with life.
The malts are big and round and chewy, with toffee and popcorn, honey and almond biscuits, while the rye adds that extra layer of rich earthy and sticky spiciness.
The hops swish and swirl over all this goodness with lime leaves and lemon curd, orange marmalade and brittle herbal leaves.
Yup, The Great Cornholio is a beer that rocks.