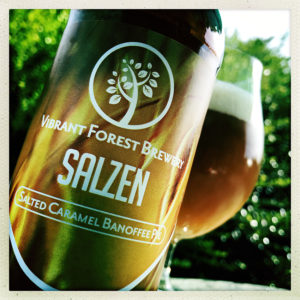 Now this my friends is a splendid take on a Witbier.
Made with a hefty dose of oats and wheat in the malt bill, this smooth and rind beer is fermented with a Munich Hefeweizen yeast strain to bring to lots of ice cream and fried banana flavours.
And it does just that.
And then there’s the addition of salt and caramel to the brew that makes the beer sticky and chewy, the hopping providing a gentle swish of herbal greenery to stop the beer becoming too sickly.
This is a pudding beer, but an afternoon picnic in the garden pudding beer rather than a stay up late around the fireside pudding beer and I for one like it a lot.