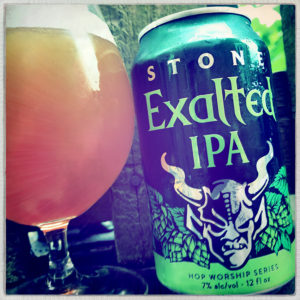 Stone Brewing Co. Exalted IPA (7%)
Stone’s Exalted Series worships different hops in varying configurations.
This version sees Citra and Loral combining to make for a superbly dry and bitter, fizzy sherbet of a beer.
The aroma is all candy floss in a pine wood, and the beer glows a rich tangerine in my glass, its little fuzzy head blinking with life.
There’s a candy cane and brioche, honey and toffee waffle malt, a little earthy saltiness from the yeast and then yards and yards of face tighteningly fresh hops.
Lemon zest and lime leaves, steely green herbal foliage, nettles, bracken and redwood resin, pencil shavings, rolling tobacco and sweet fleshy mango all make for a finish that’s at once searingly bitter and thick, chewy and rich. 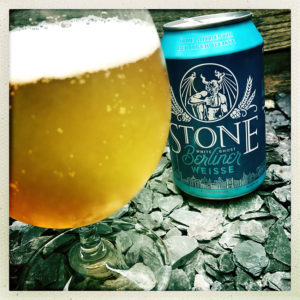 Stone Brewing Co. White Ghost (4.7%)
When in Berlin why not Brew a killer Berliner Weisse?
That’s exactly what Stone have done, creating a crisp and fresh, sharp and tart little beer that simply sings of summer fun.
It’s light and refreshing with a soft caramel coated ice cream cone malt body and a bright lemony aroma.
There’s a twist of lemon juice in the flavour as well, with the hops bringing a light spiciness, lots of pithy green herbal foliage and a brittle dry steeliness that makes for a lip puckering finish. 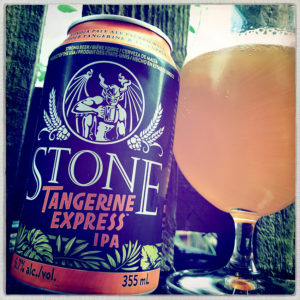 Tangerine Express (6.7%)
Stone are very clever and they know it, telling us that they’ve used pineapple to add some body to this beer but that you’d probably not have noticed if they’d not told you.
I like that sense of fun, that cheeky sureness in their own brewing.
And the thing is, they’re right.
Once you know there’s pineapple in here you realise that that’s what is adding the fruity fleshy depth to this tangerine fuelled IPA.
So what else is there here?
Well, there’s that all American candy sugar frothy sweetness, lots of caramel and biscuits from the malts and a sharp bitter dryness from the hops.
Then there’s the whole tangerines that add juicy orange, lots of dry pithiness and some eye watering lay sharp zingy zest.
All in all, this is the kind of beer that Stone excel at.