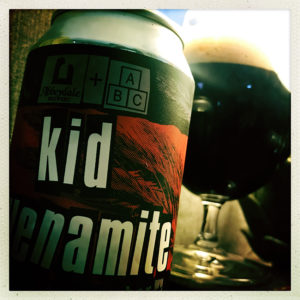 A collaboration with Alphabet Brewing Co. and named after Kid Dynamite, this is a very drinkable rye powered Baltic Porter.
And the rye plays a big part, from the deep and dirty treacle smell to the earthy pumpernickel in the flavour, you couldn’t mistake this for anything other than a rye beer.
The cocoa adds an extra chocolatey depth to the burned toast and honeycomb of the malts, while the hops are crunchy and brittle and really rather autumnal with their maple syrup and leaf litter crunch.
All this and a finish that’s rich and sticky makes this a beer worth taking your time over.