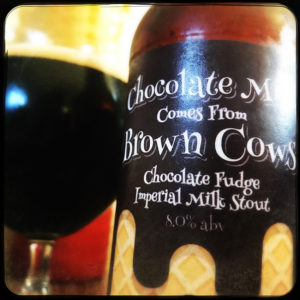 And so it was that one afternoon a home brewer sat and thought, “I know, I’ll brew a Chocolate Fudge Imperial Milk Stout,” never thinking that maybe that kind of thing is only for the coolest hippest breweries so their geeky fans will swoon over them.
It came to pass that the home brewer disappeared into his garage and set up his kit and made his beer.
And it was good.
In fact it was bloody marvellous.
It was thick and sticky and boozy.
It was warm and round and sexy.
It had acres of vanilla ice cream cornets and yards of chewy sweet toffee.
It was a beer to rival those bottles that all the geeks were paying a tenner for, and yet he’d thrown it together in his outhouse.
The home brewer sent a couple of bottles to a bloke he knew that wrote about beer, a functioning alcoholic with a decent palate, and all that came back was a satisfied sigh.
Chocolate Milk Comes From Brown Cows is an absolute sensation.
It’s big and round and boozy and hellishly sexy.
Everything is in balance, everything tastes just right.
This shouldn’t be home brew because everyone ought to be able to get hold of it.