For some time now my good friend Mark, who lives a short trip away from Hop Kettle Brewery’s Tap has been telling me I should go and visit him and together we’ll sit and drink beer.
He rates the brewery highly, and being a man of taste and suavety (copyright, Billy Childish), I trust him to know what he’s talking about.
And so it was with great disappointment that I opened my first ever Hop Kettle beer, their Best Bitter, and found it thin and unrewarding.
But actually, I’m pleased that I did, because it put me in touch with the lovely Tom, owner and brewer at Hop Kettle, and we got talking about his brewery and his beer.
Situated in Cricklade, just a hop and a skip north of Swindon’s Magic Roundabout, Hop Kettle’s Red Lion pub is, judging by the reviews and awards, a place I just have to visit, while the brewery itself, situated in Swindon and with a tap room on site, is another reason to travel down to Wiltshire, a county I know well and love very much from my travelling around megalithic monuments in my twenties.
And so we come to Tom’s beer which is, apart from his Best Bitter, which I still don’t get, clever and interesting, well made and most importantly, very drinkable. 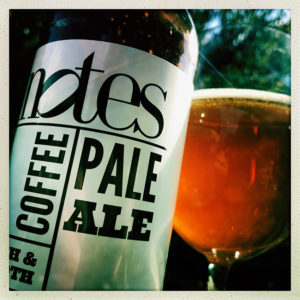 Notes Coffee Pale Ale (5.2%)
For this playful Coffee Pale Ale Hop Kettle have taken their Pale Ale and Cold conditioned it on crushed coffee beans from Notes.
The result is a superbly tasty little beer that carries a solid caramel and waffle malt body and a sharp zesty lemon curd and hedgerow hit of hops.
But the thing that really raises this beer is the cold conditioning that has made all the edges soft and round and blurry and the toasted cherry stone and leathery cricket ball of the coffee that drifts up from the beer as you pour and adds its sexy warmth to the finish. 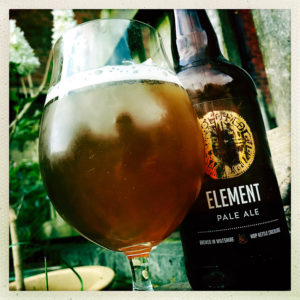 Element (4.2%)
Element is a straight forward Pale Ale, a decent beer if unexciting.
Mind you, that’s putting it down a little as, given a night down the pub, if this was on I could drink it all evening.
It’s soft and gentle, with a toffee and biscuit, honey and wafer malt body and a splash of brightness from the hops in the for of lemon juice, marmalade and green herbal leaves.
a well made standard. 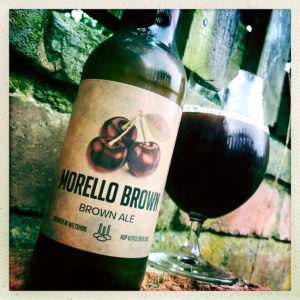 Morello Brown (5.4%)
A hefty malt bill gives this beer a deep treacle tart body, some peanut butter, while the hops provide lots of hazel leaf pithiness.
And so this is a decent Brown Ale, it’s round and nutty, chewy and satisfying, with enough sharpness to give it an edge.
And then there’s the cherries which are far tarter than I expected, fleshy they may be, but they’re also really rather juicy and bitter, giving the beer a real kick in the finish.
I like it and, should I be asked what would improve it, I’d say that I’d like a little more fizz.
But that would be being ultra picky. 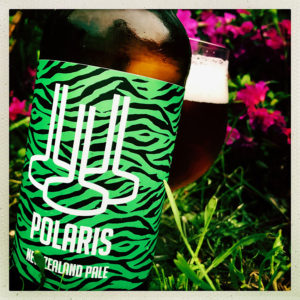 Polaris (3.7%)
So used am I to expecting and to finding lower ABV beer with a lot of hops to be thin and overly harsh that this, Hopkettle’s New Zealand Pale made me say, “ooh!” Out loud.
The smell is nothing short of thick sticky honey, nothing more, nothing less, its rich and sweet and inviting, and taking a swig you find a lovely honey and caramel wafer malt body over which the hops give you gooseberries and lime zest, elderflower, mango, green grapes and herbal garden leaves.
To put it in simple terms, I could drink this all evening every day. 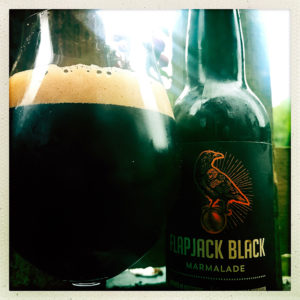 Flapjack Black Marmalade (7.7%)
Take an already delightful Breakfast Stout and add homemade orange marmalade and the result ought to be super, right?
And it is.
All the flapjack flavours are there, thick sticky toffee, lots of oats and honey, all of which is pushed along by a creamy woody black coffee and a super dry and powdery dark chocolate.
It’s thick and rich and warming, and the added orange marmalade brings an extra depth of fruity bitter sweetness that’s gloopy and round and sexy.
in a word, yum. 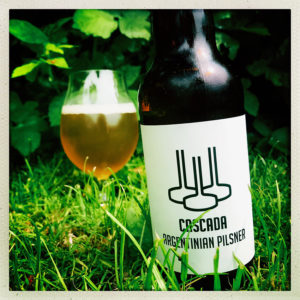 Cascada (4.8%)
Brewed with Argentinian grown Cascade hops, this is a crisp sharp Lager with lots of good things going on.
The aroma is earthily spiced dewy hedgerow and the beer sits in my glass a bright gold with a little foamy head.
The malting is soft and creamy, with buttery caramel, croissants and honey and those Argentine hops really sparkle with bright slashes of garden herbs, pithy lawn clippings and zingy lemon juice.
Very good indeed.

Rising Star (4.8%)
The first thing you notice as you pour this hazy Session IPA is the vanilla rich peach and ice cream smell of the beer, it’s very fruity and very inviting.
There’s pineapple and apricot, peach, mandarin and melon from the hops and, due to there not being too many citrus flavours popping up the soft caramel and honey, shortcake and waffle malts can hold their own, aren’t zapped out of existence like so many other Session IPAs.
So maybe this is the trick, choose your hops wisely if yo want a good SIPA, because blowing your load on a mountain of Citra is only going to harsh your buzz. 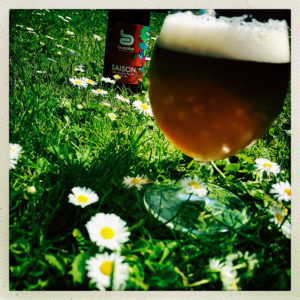 Saison (5.3%)
Brewed for Busaba, a Thai restaurant, this is a super little beer.
Made with a Saison yeast that gives you a deep rich earthy body, the aroma is fragrant and spicy.
Taking a swig you find a soft and Belgian waffle, caramel and toffee biscuit malt, along with a great big splash of lemon zest and peaches from the hops, before the lemongrass, Kaffir lime leaves, tamarind and Ginger bubble up and do their thing, giving you a deliciously fresh and fragrant, spicy punch of Asian loveliness.
Superb. 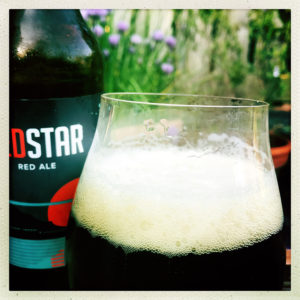 Red Star (5.2%)
Now this, this is very good indeed.
An American style Red Ale, the deep ruby beer smells of pecan pie and maple syrup.
And that’s pretty much where the flavours begin.
Well baked pastry and toffee glazed pecans, gloopy maple syrup, honey and brown bread make this a beer with a solid malt body.
The hops add a little splash of lemon juice and the sherbet zing of grapefruit zest along with orange marmalade and crunchy red autumnal leaves.
In the finish everything combines to leave a redwood resin and pine needle stickiness that has you reaching for another sip. 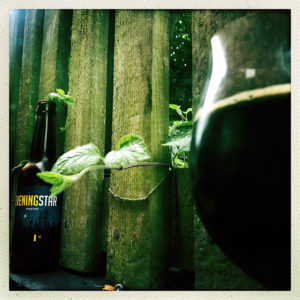 Evening Star (5.5%)
A creamy oatmeal Porter with a big hit of Rauchmalz, what is there not to like.
Evening star walks a line between Rauchbier and Black IPA, and is all the better for it.
There’s coffee and plum jam, honey, treacle and brown bread crusts from the malts, and a big blast of apricots and orange marmalade from the hops, while the oatmeal makes everything feel creamy and sumptuous.
But it’s that smoked malt that lifts this beer up into something special.
The smokiness is woody and warm, with a hint of bacon and the fug of a gently burning bonfire.
Evening Star is super. 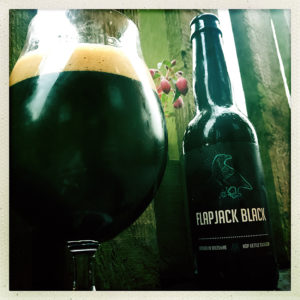 Flapjack Black (7.3%)
Coffee and treacle and oats, and did I mention coffee?
Not that the coffee is overwhelming, in fact it is beautifully balanced.
But it is a big coffee hit that you get, with cherry stones and leather satchels, rolling tobacco and walnuts making the beer feel big and woody and warm.
The oats add a creamy vanilla smoothness and there’s a little and much needed kick of fresh herbal greenery and a glob of orange marmalade from the hops.
Add to this the toffee, honey and biscuit of the malts and you have a flapjack and coffee snack permeated by a deep brandy booze that’ll make you wish you’d got a pint. 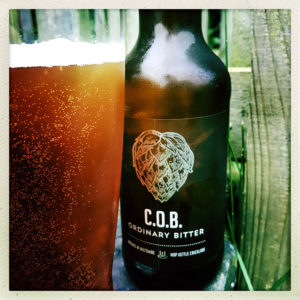 C.O.B. (3.8%)
Cricklade Ordinary Bitter is an absolutely super take on a traditional style.
For me it’s a memory of learning to drink, going to the local and hanging out with my friends.
I was a bitter drinker and this ticks all the boxes for my younger self.
There’s toasted nuts and toffee brittle, honeycomb and brown bread from the malts and then a splash of aniseed and mown lawns, pithy herbal hedgerow greenery, along with a zesty slap of lemon zest from the hops.
There’s sweet and there’s bitter, there’s soft and there’s sharp, this is a great pint of beer. 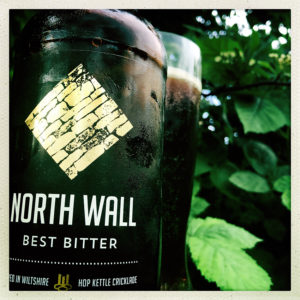 North Wall (4.3%)
North Wall is Hop Kettle Brewery’s Best Bitter and, as mentioned above, the beer that put me in touch with the brewery.
And with this, my second bottle, I stand by my initial thoughts.
North Wall, although brewed with less carbonation to better replicate the cask version, is just not fizzy enough.
It has some lovely tamarind and chestnut, toffee, honey and brown bread malts going on, and the subtle swish of liquorice and elder, tobacco and hazel from the hops.
But it feels really flat to me, which makes the beer feel heavy and thick.
Perhaps it’s just me. 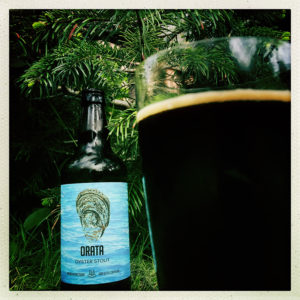 Orata ( 5.4%)
Oh, I do like a good oyster Stout and this one, with British rock Oysters and seaweed boiled in the Kettle, hits the spot.
What I like is that light airy ozone thing that wafts up as you pour, and the salty kiss in the finish, that really compliments all those solid Stout flavours.
The coffee and the toffee, the pecan pie and honey, brown bread and biscuits, treacle tart and ice cream, the roasted nuts and the smack of birch and bracken from the hops.
Orata is round and rich and very satisfying.

Thanks to Tom for his time and his beer.
You can visit Hop Kettle by following this link.

One Response to Hop Kettle Brewery