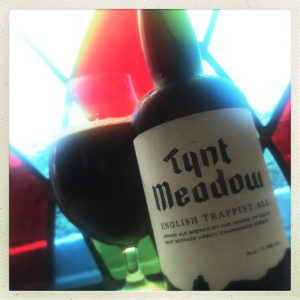 I understand, to a point at least, that people feel loyal to their locality, feel that anything made close to them needs supporting and championing.
It’s where diehard football fans come from, it’s where that need to belong comes from.
The problem with that is that people become blind, myopic, dishonest to themselves in fact.
You see this, a Trappist style beer brewed in (or with, I’m not quite sure) a local Leicestershire Abbey is alright, but only alright.
There’s some liquorice and chocolate, prunes, plums and treacle tart, but there’s also a slightly unpleasant sandy feel and chemical aftertaste that makes this beer feel like a decent homebrew, but not a beer you’d happily pay for.
And so the moral of this particular story is, be honest, even if the thing is local.