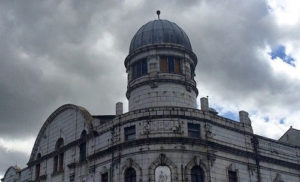 Saturday March 10th saw the start of 2018’s Sheffield Beer Week, seven days of beer and fun spread across venues throughout the city, and this year’s opening event was the Hop Hideout curated Indie Beer Feast held in the beautiful Abbeydale Picture House.

The walk to the venue from Sheffield Station takes in some rather run down looking, litter strewn post war council houses and the back of Sheffield United’s sad and tatty looking stadium with its match day advertising hand printed on to A2 paper and glued to the wall, a far cry from the stadiums of the vastly wealthy a league or two above.

In the grey of the morning all this made for a sobering walk, but then you turn a corner and there in front of you is the city’s Antiques Corner, a bright and bustling, culturally diverse area full of hip cafés, junk shops and stalls, and as you climb the gentle slope along the area’s main street you get a glimpse of Abbeydale Picture House and its shiny white domed roof at the far end of the street.
The building is a beautiful Victorian pleasure-house that has been saved from demolition and is slowly being renovated to its former glory.

It holds concerts and art exhibitions, markets and local social events and today its hosting some really impressive breweries. 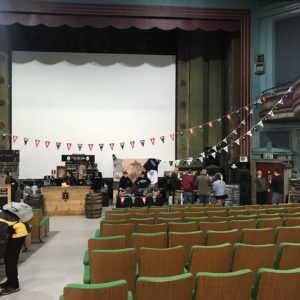 As we enter, the ticket office and foyer area of the venue is home to the Abbeydale, Lost Industry, Torrside and Blackjack breweries and I begin the day with a quick catch up with Jimmy from Lost Industry while enjoying a glass of his rather good Mojito Sour (5.3%).
With my lips puckered and my tongue curling we wander around the venue, entered the large and airy space of the main auditorium, its newly replaced rows of theatre seats curving across the room with a line of breweries waiting to serve us under the apron of the stage.
But before we make it that far down, I spy to my left Mad Hatter Brewing’s fantastic monster bunny stand and to my left Elusive Brewing’s 80’s arcade game stand.
After a natter with Andy from Elusive and a wander around the stage area of the venue to take in the offerings from Magic Rock, Thornbridge, Fourpure, and Sierra Nevada, to name but a few, I remembered Torrside had their I’m Spartacus IPA (6.8%) on tap and decided that that would be just perfect with some food.
The street food on offer all looked good and I opted for a vegetarian lunch of goats cheese and beetroot risotto.

Taking my little parcel of food into the back room seating area I was blown away by the space that I found.

Behind the stage, the back stage in an enormous area with a vaulted roof, the running boards for the lighting and stage sets still in situ.

The acoustics of the room were lovely and, though a little chilly on a March afternoon in South Yorkshire, it was a superb place to spend a while eating and chatting and enjoying a beer. 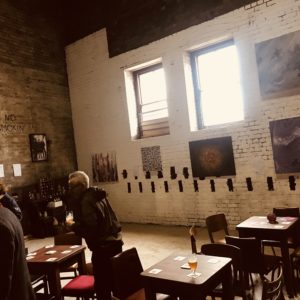 Stomachs filled, we headed back into the main room for more beery sustenance and I opted for the really disappointing Sierra Nevada Hop Bullet (8%) that was a pale comparison to my beloved Torpedo.

We wandered and chatted and drank and chatted and in doing so found our way back to the Lost Industry area where we decided to hang out for the rest of our time.
After all we were surrounded by friends in the form of the aforementioned Jimmy, the avuncular Rob of Blackjack and the Torrside gang who managed to sneak two bottles of beer into my bag for me to find later on when, more than slightly tipsy, I opened said bag on the train home to discover the pair nestled amongst my jumper.
It could well be, of course, that I knew I was being given them, or bought them, but had forgotten all about it.

After all, I have been known to lose the odd hour or so when I’m out drinking for the afternoon.

The other beer I enjoyed that day were Lost Industry’s Off Your Coconut (9.3%), a superb take on a Pale Milk Stout that was like a big drunken Bounty Bar, Dirty Bassett (6.2%), also from Lost Industry, that’s a brilliantly named and brilliantly made Liquorish Milk Stout, Blackjack’s Devil’s Bedpost (5%), Rob’s delightfully balanced Pale Ale and, beer of the day for me, Torrside’s Monsters Imperial Vienna (12%). 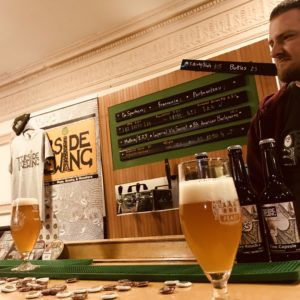 Imperial Vienna is rich and creamy, soft and smooth, with a caramel biscuit and brandy snap heart and a massive thwack of hoppy happiness pushed along by a sexy boozy heat.

And that was that.

After saying our goodbyes to various friends and colleagues, and catching up with Jules from Hop Hideout to tell her how marvellous the venue and the event had been we slunk off into the dwindling light of the early evening to make our way back to our trains via various watering holes and a couple more drinks.

I was really impressed by the inaugural Sheffield Indie Beer Feast, the venue was amazing, the beer on offer was well presented and wide ranging enough to hold my interest and the atmosphere of the day was warm and friendly and welcoming.
I really hope there’s another one next year.
If there is I’ll be first in the queue.