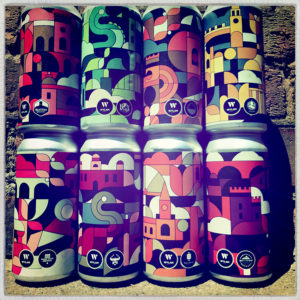 Wylam Brewery, who everyone knows and most people love, have been collaborating with their friends and fellow brewers based in the north of England.
The result is a collection of eight beers that have been beautifully presented in matching cans that illustrate, symbolically, the industry and nature of their particular part of the world.
I love how they look and I love the idea, but sadly I’m not altogether taken by all of the results.
Look… 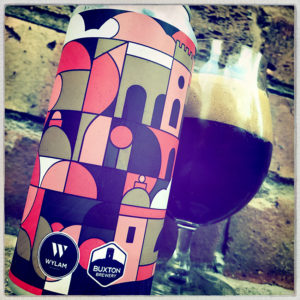 The first in this series of collaborations between Wylam and their northern friends is this superb Chocolate Chip Vanilla Imperial Stout (10.5%) That has been brewed with Buxton.
And the thing is, Buxton are particularly good at high ABV flavoured Stouts, which is why this doesn’t disappoint.
There’s fathoms of deep rich chocolate and coffee, honey, toffee, flapjack and tamarind from the malts, they feel thick and creamy, and alongside them the hops give you the snap of an autumnal wander down your nearest country lane, bracken and Hazel, nettles and maple, while the addition of figs and cranberries, raisins, vanilla and cocoa make the beer feel like you’ve just started eating a satisfyingly chewy desert.
Very good indeed. 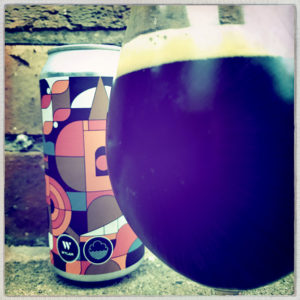 Brew 002 is a Strong Brown Ale (6.3%) brewed with Cloudwater, and in all honesty its a decent beer if not overly exciting.
Pouring a chocolate brown it smells of Cadbury’s fruit and nut chocolate, and taking a swig you’re immediately met by a big milk chocolate, hazelnut, praline and raisin malt body.
It’s round and warm and satisfying, eminently drinkable, and pushed along by a subtle whisky warmth and a hit of crisp autumnal leaf litter from hopping.
But beware, this is a very conventional tasting beer, nothing will knock your socks off, nothing will make you gasp with delight, instead you’ll feel all comfy and cosseted as you find your way down to the last mouthful of this pleasantly and unapologetically normal beer. 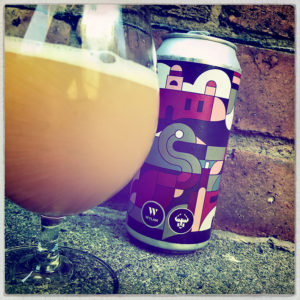 I’m not altogether sure about Brew 003, a mixed fermentation farmhouse beer made in collaboration with Black Lodge.
It smells really nice, with lots of fleshy fruit coming on all sweet and inviting, but the beer has been made with a lot of fruit, apricot, peach and mango to be precise, and they really take over, leaving little room for anything else.
The beer feels thick and sticky, the malting struggles to breathe and the hops, which we’re told are citra, could be any number of varieties given that it’s near impossible to pick them out.
It’s far too fruity for my liking. 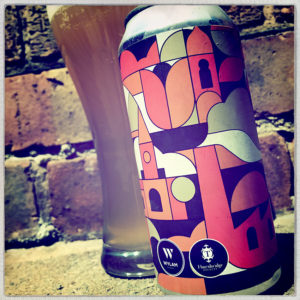 Brew 004 is an American Wheat beer brewed in collaboration with Thornbridge.
It’s a very drinkable pale gold beer with a little wispy head and a big jasmine aroma, which’ll be down to the addition of Jasmin flowers in the beer.
Orange peel has also been added, and this provides a fresh zingy zap of citrus across the soft creamy caramel and French bread of the malts, while the Chinook and Centennial bring rolling tobacco and hedgerow, melon, lemon and peach to the crisp dry finish. 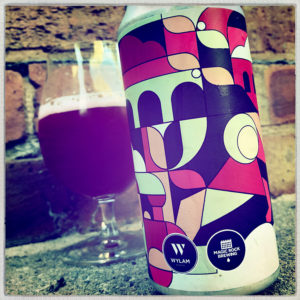 Magic Rock collaborated with Wylam for Brew 005, a Forest Fruit Kettle Sour (4.5%).
It pours a delightfully deep pinky purple with a little foamy head and has a slightly fatty metallic tinned fruit aroma.
I like the steely teeth-on-edge tartness that the Kettle souring brings, and the fruits are soft and fresh and bright.
But that’s about all there is, with the malting and hops (Cascade if you were wondering) struggling to find their feet, much like Brew 003. 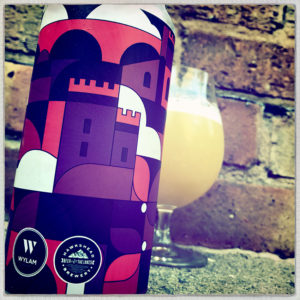 Brewed in collaboration with Hawkshead, Brew 003 (5%) is a DDH Pale Ale that pours a rather cloudy peach, looking a little NEIPA-ish, but not going so far once you take a swig.
There’s lots of peaches and mango, lemon sherbet, hedgerow greenery and even a little fresh rolling tobacco from the hops, along with ice cream cones and rich tea biscuits, caramel and honey from the malts.
The aroma has a little fruit salad and toffee hit and the finish is long and sharp, just hinting at that NEIPA yeasty sweetness, but… 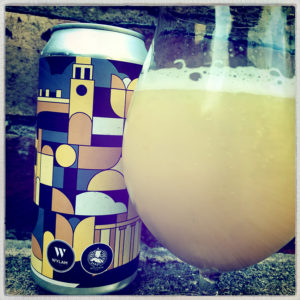 Brew 007 is an IPA (7.2%) brewed with Northern Monk and, judging by its soupy body and peachy colour, it seems to be a NEIPA.
And yes, taking a swig that’s where we seem to be, that lightly earthy, slightly sickly yeast fruitiness that masks almost everything else, leaving the malts feeling overly sweet and the hops not as fresh and bitter as I’d have liked.
But then, after another mouthful or two, once I’d grown accustomed to the yeasty fruit thing, I started to find some caramel and wafers from the malts and a slash of green fresh herbal leaves and lime zest.
I’m still really bored of NEIPA’s but this one’s pretty good. 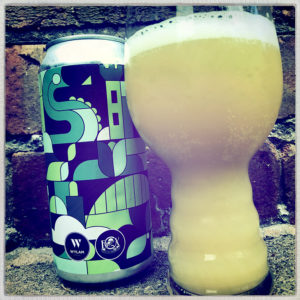 If it looks like a duck and it sounds like a duck, Brew 008, a DIPA (8.5%) brewed with Box Social, appears to be yet a another NEIPA, a DIPA NEIPA.
It’s thick and cloudy, looks like paint and smells of fruit salad sweets, none of which is a bad thing.
But there’s that overly sweet yeasty fruitiness that NE yeast provides, and it washes over all the creamy caramel and brioche of the malts and, if I’m honest, it knocks out the sharpness of the Citra, Amarillo and Galaxy hops.
It’s a decent enough beer with a good boozy hit in the finish, I’m just so tired of this NEIPA thing.