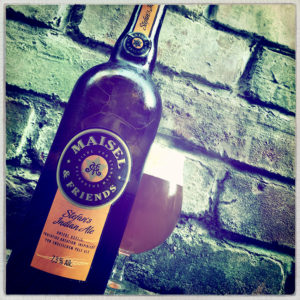 Brewed as part of Maisel’s “& Friends” series, this is a mighty fine IPA from a brewery best known for their brilliant wheat beers.
The label doesn’t tell me which hops have bee used, but there’s enough liquorice root and burdock alongside the bitter lemon zest and orange marmalade to make me think there’s some lovely Traditional British hops coupled with a splash of West Coast America.
The malting is round and chewy, with biscuits and honey, toffee and waffles, and there’s a brandysnap tinge to the long boozy brown sugar and hedgerow of the finish.
Very good.