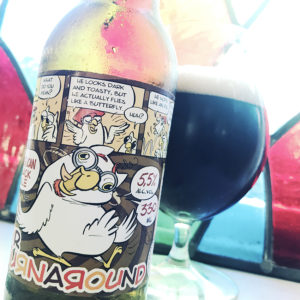 This, dear reader, is a Cascadian Ale, and is also by far the weakest beer I’ve had from this brewery.
I mean it’s drinkable and pleasant, but I’m usually bowled over by Uiltje beer, but this one just has me thinking it’s alright.
There’s some treacle tart and burned toast from the malts and a hit of lemon sherbet, orange peel and lime zest from the hops, but it all feels rather polite, even apologetic. Usually Uiltje beers are big and bright and fierce, but this one is just too unsure of itself to be anything more than OK.