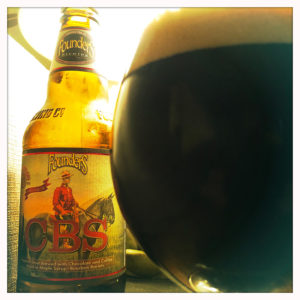 It’s Monday evening but I’ve had one of those days that calls for something a bit ridiculous.
And so I grabbed this from my fridge, took the cap off and was met with an enormous plum pudding, window putty and rum and raisin aroma.
Then I took a swig and two things happened, firstly all my woes of the day disappeared and secondly, I couldn’t care less what might happen tomorrow as the warm round maple syrup steeped rum of the damp woody barrels that this beer has been aged in wandered around my face while a hit of rich black coffee, treacle tart and rosehip syrup makes up the thick gloopy malting.
There are hops as well, they’re autumnal and crunchy with red leaf litter and orange marmalade.
The finish is warm with rum and brandy and freshened by a pithy hit of redwood resin.
CBS has fixed my Monday evening.