Posted on September 7, 2018 by Simon Williams 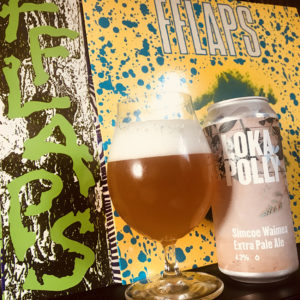 I was in the mood for some classic Welsh language Indie and then, once I’d stuck a Fflaps record on, I decided I needed some top Welsh beer to go with it.
And what better than a super Pale from LOKA, this one is fresh and zingy, refreshingly dry and bitter but with lots of sweet malty goodness.
You’ll find caramel ice cream cones, honey and waffles, and then a great big hit of sharp and bitter, pithy and dry lemon zest and nettles, rolling tobacco and lime leaves.
All in all this is a beer I could easily neck in one on a night out in a pub, but that instead I’m going to force myself to take my time over it while I sink into the world of Fflaps.