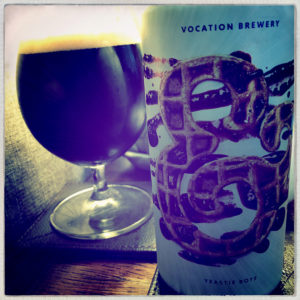 If, a few years ago, I told you that you’d soon be able to buy a Blueberry Breakfast Stout in a supermarket you wouldn’t have believed me.
Mind you, I wouldn’t have believed me.
But here we are with Tesco stocking this super little Stout.
And yes, I know that both breweries are already Tesco staples, but the point is that this is really quite an out there beer style for your regular supermarket beer buyer.
So let’s get into it.
Breakfast Club is a Stout with Blueberries, Blackberries, Vanilla and Cinnamon, and it does lots of good things.
It’s round and rich and warm, the malting coupled with the Vanilla and Cinnamon makes for a waffle, doughnut, honey and brioche body while there’s a delightful and much needed smack of woody green and pithy hops – Willamette if you were wondering – and an extra layer of fruity undergrowth from the Vermont yeast.
The fruit in the beer is the final ace, bringing a fresh round fleshy pop of berry goodness without any sharpness.
Instead it’s like a spoonful of jam, sweet and satisfying in the chocolate, coffee and vanilla ice cream finish.
Yup, I don’t quite believe it either.