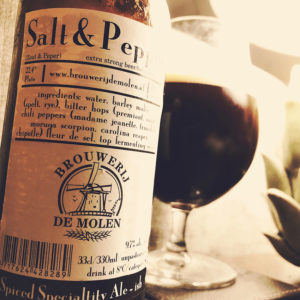 Not many beers have made me swear out loud, but this one did.
It’s because the very first mouthful hurt.
Yes, hurt.
The combination of Madame Jeanette, Trinidad Moruga and Carolina Reaper chilli peppers, pushed forward by a clean saltiness from the Fleur De Sel, punch you full in the face from the very first mouthful, and if you’re not ready for it, as I wasn’t ready for it, it comes as a bit of a shock.
You see, the aroma gives nothing away, wafting up at you with bruised apple cores and lightly spiced bread dough, everything smells reasonably innocent, but that hit of chilli is almost heart stopping in its weight.
Once you’ve let the heat settle a gentle chocolate and coffee, treacle tart and pretzel malt starts to surface along with, dare I say it, a hint of hoppy bitterness.
But each time you take another mouthful you have to fight the chilli attack which, for me at least, all too soon becomes more of an ordeal than a pleasure.
In the end I gave up and poured it away.