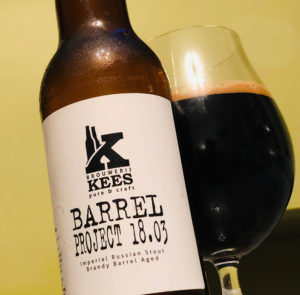 Aged in Brandy barrels, this Russian Imperial Stout is every bit as good as you’d hope.
For a start it’s as dry as a bone, with cocoa powder, maple syrup, burned toast and black coffee from the malts, not to mention dates and raisins and an aroma full of PlayDoh and rum and raisin truffles.
The coupling of Fuggles and Sorachi Ace for the hopping is inspired, mixing an old traditional rich ivy leaf and dandelion and burdock earthiness with a sharp as a tack lemon sherbet attack that both enriches and brightens the beer so that you get a splash of colour in the long dark boozy treacle tart and brandysnap finish.
Super stuff.