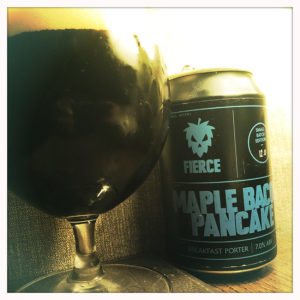 Fierce have suddenly upped their game, moving quickly from a brewery I though was OK to one I need to look out for.
Here’s a case in point.
Maple Bacon Pancake Porter is a delightfully playful beer, steeped in rum and raisin booze and bringing sticky sweet and woody maple syrup, dark chocolate, black coffee, rolling tobacco and hazel leaves along with creamy pancakes, oat biscuits and brandy snaps to the party.
The only thing missing is the bacon.
There’s none in here of course, but neither is there any hint of anything that might resemble bacon.
But other than not fulfilling its title, this is a superb Porter that’ll have you smiling from ear to ear as you plunge into its dark boozy depths.