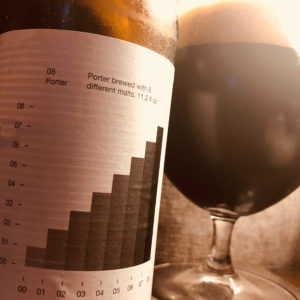 An eight percent Porter brewed with eight different malts, this promises far more than it delivers.
It’s a decent enough Porter, a Porter I’d happily drink again, but it’s just a high ABV Porter, and I’d fight anyone who argues they’d know there are loads of malts in here if they’d not been told.
After all, there’s a smoked malt included but not enough smokiness to make you think of it.
Instead you find lots of chocolate and brown bread, treacle tart, coffee, honey and digestive biscuits from the malts, a hefty smack of rum fuelled boozy heat and some hazel leaves and orange zest from the hops.
Decent enough.