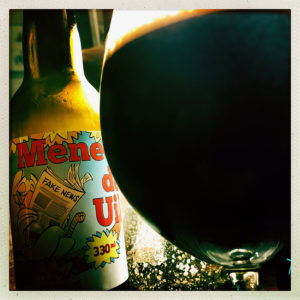 Internetty type stuff tells me that this beer is usually barrel aged but that this version isn’t.
I’m a bit surprised by that, as there are a bunch of bruised apple and damp oak flavours that would have me guessing hat this beer has been lounging about in a barrel or two.
So what we have here is a deep boozy Porter packed with date and damsons, chocolate cup cakes, coffee, tobacco and croissants.
It’s a big drunken breakfast of a beer, caramel and fudge, brandy snaps, corn flakes, cocoa powder and croissants, not to mention a big hit of well done wholemeal toast all leading you through an autumnal garden to a sticky orange marmalade and green tea, whisky and Panacotta finish.