Posted on November 8, 2018 by Simon Williams 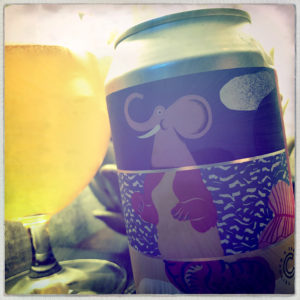 Hot summer afternoons lounging in Brockwell Park on my way home from work.
Lying there one day and the phone ringing and being shouted at by Placebo’s manager as he thought I’d not done something that I should have in readiness for their Polish and Russian gigs that I was in charge of.
I’d not thought about any of that until this little can of beery joy turned up and its name transported me back to Brixton in the early two thousands.
Life was very different back then.
So was beer.
I’ve written about this beer before and at that point I wasn’t overly impressed.
But this beer, this beer here, canned and fresh with Canopy’s new branding – which I also like very much – is a super little IPA, full sharp fruity fun.
The aroma is sherbet lemons and lime cordial an the beer pours a bright gold with a little fluffy head.
There’s a subtle yet solid lightly salted caramel, ice tea biscuit and honey malting over which the hops bring big bright swipes of steely herbal leaves, lemon zest and orange marmalade, all of which leads you to a long dry bitter finish.
And for those who may be wondering, yes I had done everything needed for Placebo to go to Eastern Europe.