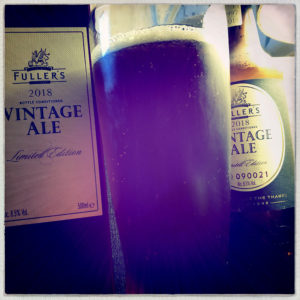 I’d love to be able to age beer so that I can compare and contrast, but I don’t have either the money to buy that many extra bottles or the space to store them, and so I’ll never know just what this beer, or any of the previous Vintage Ales, might grow into.
And so I can only talk about this year’s Vintage as a fresh new beer, and as a fresh new beer this year’s is the best I can remember for some time.
There’s that same old satisfyingly comfortable barley sugar, white rum, honey drenched oaty biscuit and toffee malt, along with that light hum of silage and bruised apple cores that I really love in this beer.
But then there’s the hops, and this year Fuller’s have used two modern English varieties, namely Olicana and Ernest, that between them bring fleshy fresh apricot and spicy hedgerow, along with Target, Goldings, Challenger and Northdown that underpin the modern flavours with more traditional woody liquorice, mown lawns and hazel leaves.
The sum total is a big boozy beer that’s just right for relaxing with in the long dark winter evenings.