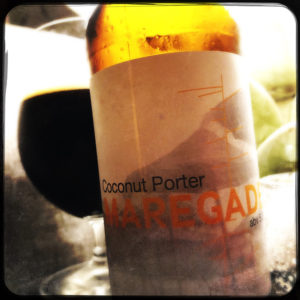 For all the nice and soft coconut that this beer manages to deliver, unfortunately there’s a shed load of other things going on that I’d rather not experience.
Like the burned matchstick smell that lingers behind the chocolate of the aroma, or the fact that, apart from the coconut, that in itself is good but by its very nature light and watery, the malting is so flimsy that it collapses in on itself, leaving an apology of coffee and the merest hint of toffee.
If there are hops they’re in disguise, and in the finish, save for a tiny hint of bile, a swish of coconut and a dab of last night’s ashtray, you’re left with a slosh of fresh water.