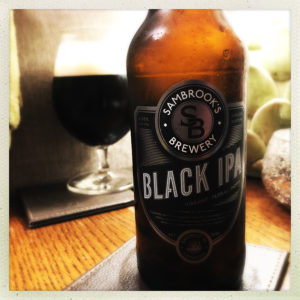 I have a real soft spot for Sambrook’s, built on nothing more than they feel like a secret.
They feel like the bands I used to listen to, locked in my bedroom listening to John Peel and feeling like no one else knew about this stuff, even though in reality lots of people did.
It felt like my own.
And Sambrook’s feel like that.
Even though I know they’ve done beer for Marks & Spencer’s, they feel like an unknown treat.
And so to have their new Black IPA turn up on my doorstep was really exciting.
Most importantly, it doesn’t disappoint.
From pouring the deep purple black beer with its creamy frothy head and smelling the prunes and chocolate, to taking your first mouthful to find rum and raisin chocolate, black coffee and thick runny honey from the malts, before the sharp snap of pithy hedgerow greenery, lemon zest, lime leaves and sticky orange marmalade of hops slaps you about the face, this Black IPA does everything right.
And in the finish the warmth of the booze rounds out the dry bitterness to leave you with a warm satisfied glow.