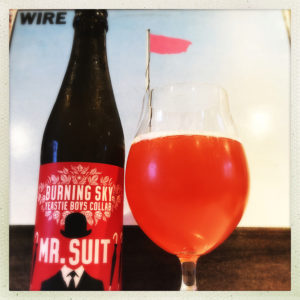 I keep on telling you how I don’t like modern sour beer, how so many of them are so singularly one dimensional.
And many of them are, but there are a few, a handful at most, British breweries that manage to make this style with depth and charm, clarity and, most of all flavour.
Lost Industry is one such brewery whose beer isn’t sour but tart, packed with interesting things to discover, and Burning Sky are another.
And this beer, brewed with the ever cool Yeastie Boys, a brewer who barely puts a foot wrong, is just such a beer.
Brewed as part of Yeastie Boys’ tenth birthday celebrations and using red currant purée and a blend of Brettanomyces and Lactobacillus yeast strains, this glowing pink beer that almost matches the flag on the cover of the record that is home to the song that this beer takes its name from, smells of berries and sweet silage.
In the flavour there’s a deep farmyard fug of damp straw and winter fodder – a smell, incidentally, that I enjoy enormously when out cycling – along with sticky honey, shortcake and toffee, a snap of woodland greenery, pithy and sharp from the hops, and a metallic and pithy tartness from the earthy yeast.
In the finish you find an intriguing post of freshly cut garden flowers.
It’s an absolute delight, but I can’t quite put my finger on where it comes from, but it sits just above the sweet acidity of the redcurrant, giving the beer a refreshingly floral finish.