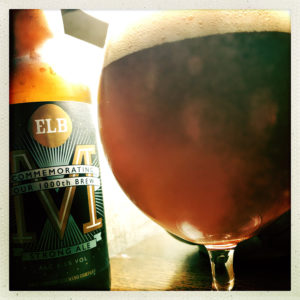 M is a Strong Ale and ELB’s 1,000th Brew.
So first off I’d like to congratulate them.
However, more often than not I’ve been disappointed with their beer, and so it was with trepidation that I opened this little bottle.
And I was right to be concerned because, while this is a perfectly drinkable beer, it feels for all the world like a home brewer’s Fuller’s Vintage Ale clone.
It has all the essential things, from the rum and raisin, digestive biscuits, whisky heat and aniseed, hedgerow and mown lawns of any number of Fuller’s variations, but none of the balance or panache that you get when opening a Vintage Ale.
Nothing feels quite right, and furthermore there’s a slight petrol hum in the finish.