Lost Industry Brewing Why Can’t We Just Get Along (5.5%)

Posted on December 5, 2018 by Simon Williams 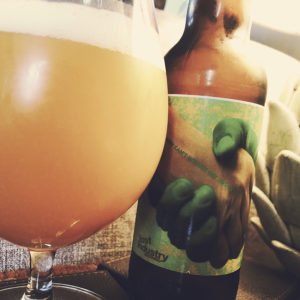 I’ve been saying for some time now that I’ve really gone off modern sour beers.
But the thing is, I can always make an exception when Jimmy at Lost Industry has anything to do with them.
You see, he is becoming somewhat of a master at this style of beer, and even though this has been brewed in collaboration with the fine folk at Turning Point Brewing, this little bottle of sherbet fresh fizzing delight has Jimmy’s fingerprints all over it.
The beer pours a cloudy mango orange and in fact, apart from the big foamy head, could easily be mistaken for a glass of mango juice.
The aroma is fruity and bright, with a little steely metallic edge and from the first mouthful you know why this is a very good take on the style.
What Lost Brewing seem better than most at doing is creating layers of flavour and not just delivering a beer that is simply sour with little else to go at.
In fact, I’d argue that this beer isn’t sour, but rather that it is dry and tart and crisp.
There’s a soft and subtle caramel and brioche malt body and a smack of lemon zest and pithy hedgerow from the hops, while the fresh mint prickles away with a delicate sweetness in the background and the mango brings a big fleshy roundness to the beer as you enjoy the sharp keen and lip smackingly dry finish.