Posted on December 9, 2018 by Simon Williams 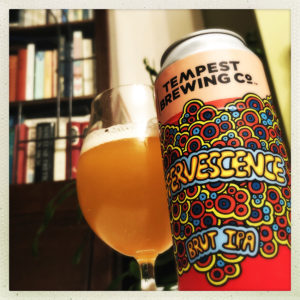 Maybe it’s just me.
Perhaps I just don’t get Brut IPA’s.
Drier and clearer than a NEIPA, right?
Well, that’s just an IPA, isn’t it?
Take this offering from Tempest for example.
It’s a damned good beer, unsurprising for one of my favourite breweries, it’s a really well made IPA with a hint of earthy rye loitering in the background of the sticky caramel, wafer and salty shortbread malting, and a great big smack of fresh herbs and orange marmalade, pithy gooseberries, green grapes and peaches from the hops.
And there’s a long and bitter, dry and crisp finish to boot.
But Brut?
I suppose the fizz feels a tiny weeny bit more sparkly, but that could just be my imagination.
This is a very good IPA, but could someone explain to me why it isn’t just that?