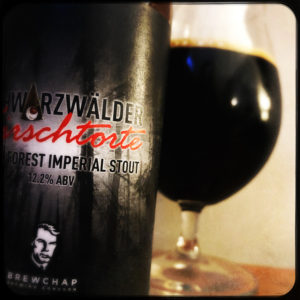 What do you do when one day, while waiting in the school playground to pick up your child, a friend says they’ve a shed load of cherries they don’t know what to do with.
You send them to your friendly home brewer, that’s what.
And that’s exactly what I did.
My friend Rebecca had so many cherries she’d filled her house with jam and didn’t know where to turn, and so I wrapped up five kilos and posted them to Ian BrewChap to see what he could do.
What he did was create a monster of an Imperial Stout packed with molasses and treacle tart, coffee and caramel biscuits, a hint of vanilla and a big slap of hedgerow greenery, all of which sets the scene for the slightly tart and very fruity cherries that bring a big meatiness to the warm boozy rum and raisin finish.
So that’s what you do when your friend tells you they’ve too many cherries.