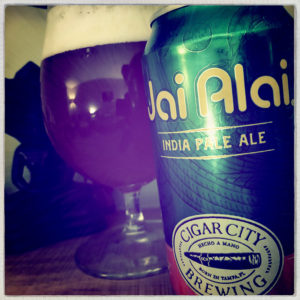 For some years now Cigar City of Tampa, Florida, have been a name I’ve known but only very rarely been able to try, and only then when brewing in collaboration with a UK brewery.
I’ve heard lots of good things though, and so when James Clay announced that they have done a deal with the American brewery I was keen to get hold of their flagship IPA to see what the fuss is about.
Jai Alai is a super clean, crisp and bitter beer that pours a warm gold with a big fluffy head and smells of apricot jam and redwood trees.
It’s a sweet resinous smell, and it’s very inviting, drawing you down into the beer where you find a soft and chewy malt of lightly salted caramel biscuit, a blob of honey and little shortcake.
The hops – Six varieties I’m told, though I’m not told which ones – are super citrussy, with loads of pithy orange peel, lemon zest and a fist full of freshly picked steely dry herbal leaves, all of which is wrapped in a woody tobacco leaf jacket.
This is a great little IPA and I for one will be keeping a keen eye out when the beer comes into the UK later in the year.