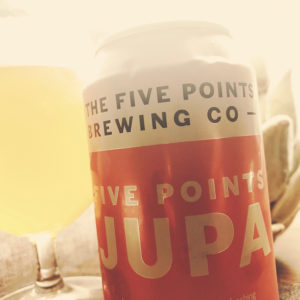 JUPA is a “Juicy Pale Ale”.
Its can tells me that it is a refreshing beer with flavours of pineapple and mango.
And it is.
But it still leaves me with very little to say.
It’s a decent enough Pale Ale, pouring a light amber with a little fuzzy head, the aroma begins with some kids’ sweet shop pineapple chunks but quickly becomes a little too sweetcorny for my liking.
And that sam thing happens as you drink.
The first few mouthfuls are pleasant enough, but very soon what began as a lightly fruity beer becomes a weird one dimensional and rather cloying affair that makes it difficult to finish.