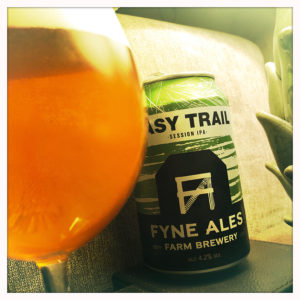 Fyne Ales have seemingly rebranded as a “Farm Brewery,” which is, excuse the pun, fine, as they do brew on a farm.
But it seems a little unnecessary to add the farm bit to a brand that is already established and respected.
Anyhow, I guess that the beer is the most important thing and so I’ll talk about that, though truth be told I’ve always had a bias towards anything Fyne do as they were one of the original supporters of CAMRGB and what we were trying to do.
Easy Trail is a Session IPA that’s more of a Pale Ale and would be far better served by taking that name.
It’s a very good beer, refreshing and light, with a lovely balance between the soft and smooth caramel and shortbread of the malting and the lemon curd, lime, melon and tobacco leaves of the hops.
But most importantly, unlike so many Session IPAs that thrust their hops forwards leaving a cavernous hole where the body should be, Easy Trail is round and gentle and beautifully balanced.
It’s a beer that, if found on tap in a pub, you’d happily drink all evening long.
Super stuff from this “farm” brewery.