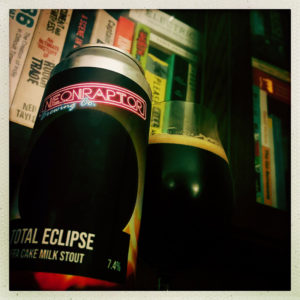 I was expecting so much from this, a Jaffa Cake Milk Stout, it sounded like it was going to be amazing.
A thick milk Stout with added cacao nibs and mandarins sounds like it ought to be a real treat.
Bu the problem is that the oranges are far too bright and zingy, taking over both the aroma and the flavour.
The malting tries its best to be rich and creamy, with chocolate sauce and honeycomb, brandy snaps and digestive biscuits, but it is bullied into submission by the mandarin oranges that are far too sharp, in fact so overwhelming that they end up tasting like washing up liquid smells.
I really wanted this to be brilliant, and on paper it sounds like it should, but I ended up pouring it away.