Sheffield Indie Beer Feast, or Do You Have An Inbuilt Homing Device?

I’d like to tell you a story.
A story that starts well, though I’ve no idea how it finishes.

You see, I was kindly invited to attend this year’s Sheffield Indie Beer Feast last Friday and after last year’s event I was really excited about going.
I organised a small gang of #CAMRGB drinking friends to go with me and we met up at The Sheffield Tap on a bright and fresh South Yorkshire morning.
There was myself and Chris (@titwillars) travelling from Leicester, David from Milton Keynes, Alan from Doncaster and Ian (BrewChap) from Leeds.
Pleasingly Ian was bringing some of his Schwarzwälder Kirschtorte in a 750ml bottle for us to share later on.
We had a swift half at the Tap – mine was my first taste of Salt Brewing’s beer, an experience that I found only OK – and then jumped in a cab for the ten minute ride over to the beautiful Abbeydale Picture House that again was hosting the event. 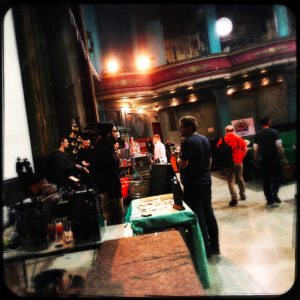 The Abbeydale Picturehouse in all her glory.

I’ve talked at length in last year’s article about how beautiful the Picture House is, and it wasn’t until we were inside that I remembered just how cold it is, though the atmosphere soon warmed it up.
Our first visit was to Comrade Jimmy’s Lost Industry to catch up and have our first beer of the festival.
On Jimmy’s say so I went for his Bordeaux Barrel Aged Cherry Sour (6.5%) which warmed me up no end and had my lips puckering at the though of what was to come.
And what was to come was a day of fabulous beer and an accidental meeting that had me, for the first time in a very long time, awestruck and almost speechless. 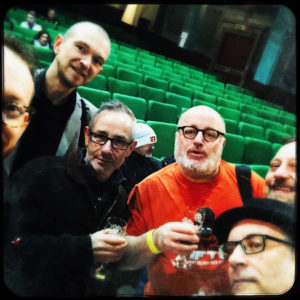 Meet the gang ‘cos the boys are here…

Gavin, the last member of our crew, arrived as we wandered about the venue to get a feel of where everything was and we took an obligatory selfie before getting the next beer.
Mine was a very good little Pale Ale (4.5%) from Wild Card Brewery that I drank while having an interesting natter with one of their brewers (whose name escapes me I’m afraid).
Then I moved on to Abbeydale where they had a really super Pale Ale called Reverie (4.2%) for me to try, and this was swiftly followed, via a quick catch up with Andy of Elusive Brewing while downing a large glass of his Obi Wan Shinobi, an 11.2% smoked barley wine beast.
Next I visited Wander Beyond, whose beer I have been impressed with since I first tried it about eighteen months ago.
They’d got some terrific beer on offer, including a 9.3% Mild, a reworking of their Strawberry & Cream Pale Ale (5%) and a raft of other goodies.
This brought us to lunchtime and I caught up with the gang, via a third of Cloudwater’s Chubbles (10%), in the back room where the food stands were located, joining Ian in a rather fine bratwürst and chips meal from the amazing Get Wurst. 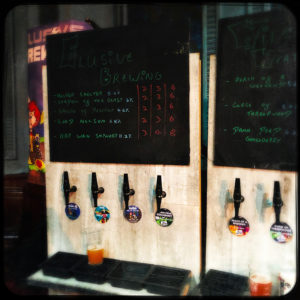 Earlier in the day, while travelling up to Sheffield, I had been chatting with Adrian Tierney Jones (@ATJbeer) about meeting up so he could sample Ian’s beer with us and then, after a couple of tweets to the #CAMRGB massive, we were invited to a new bar called Jabberwocky as a venue for the tasting.
But before we left, and just after a catch up with the good folk of Orbit Beer, I was turned into a fawning fanboy when I noticed that a new Sheffield brewery called St. Mars Of The Desert were using Pretty Things Beer & Ale Project hand pulls.
Pretty Things are heroes to me, cuckoo brewers based in Somerville MA, who travelled the USA making the most astonishing beer, in fact theirs is the only beer I have ever given a five start Untappd rating to.
I walked over to their stand and mentioned the hand pull logos to be told that it was in fact Dann & Martha of Pretty Things, who have relocated to Sheffield and set up shop.
I gushed about my love for their beer, making them read my reviews and, quite possibly, being a little bit embarrassing in my excitement.
They talked me through the range that were offering and every beer was beautifully made, every one a pleasure to drink.
My favourite was their reworking of one of their classics, Jack D’Or (6.4%), which immediately became my beer of the day. 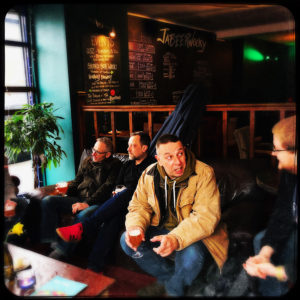 And so it was that with tears of joy in my eyes and a stupid drunken grin on my face we wandered over to Jabberwocky on Sheffield’s London Road, joined by old friend and fellow beer writer Steve Lamond (@BeersIveKnown).
The bar is a great addition to the city’s beer scene, offering a solid range of beer served by knowledgeable and friendly staff.
We’d been reserved a comfortable corner, all leather sofas and low tables, and settled in with a glass each of Buxton’s Axe X (6.8%) until Adrian arrived and we could open Ian’s beer.
He carefully poured his Imperial Stout so that everyone, including some of the other drinkers in the venue and its staff could get a taster and we all relaxed into this enormous chocolate and cherry pudding of a beer.
To my delight Adrian really liked it and the discussion opened up about home brewing and what could be done.
But then Ian opened another of his beers.
This time it was his Chocolate Milk Stout (8%) and we were all completely blown away.
After taking Mr. TJ away from beer and back into his old days as NME Sub-Editor (I just can’t help myself when I see him as it’s such a big part of my teenage years), he kindly bought a round and said his goodbyes as he headed to the Abbeydale Picture House with Steve in tow. 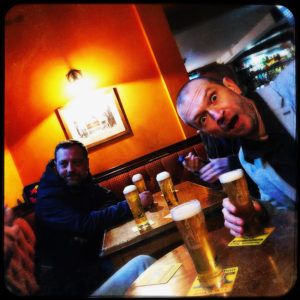 By this point it was getting on a bit, David had gone to check in to his hotel, and I’d said I’d like to get a train somewhere around 6pm.
We headed in the direction of the station when Gavin decided he’d “treat us” to a place he knew close by, and as a result I spent the first time in many years in a Jamaican bar drinking a half of Red Stripe before he said goodbye and made his way home.

Now we were down to four and we headed in to The Sheffield Tap to grab one for the road.
It’s here that my story becomes a little bit murky.
I remember having a good laugh and lots of banter with my friends, and I remember that we drank an Orval, a Honeytrap by Alphabet Brewing and Raspberry & Vanilla version of Beavertown’s Heavy Water. 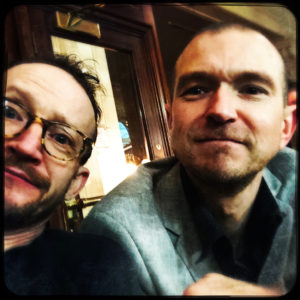 Is this the end?

But the next thing I remember is waking up in my favourite armchair in my house in my pyjamas and needing a wee.
I have a very vague recollection of Chris’ lovely and incredibly patient wife meeting us from the station and driving me home, though that could easily be a memory from any one of our other drunken outings.
Needless to say I woke up on Saturday morning feeling a little but fragile but as happy as a happy thing that I’d spent 2019’s Sheffield Indie Beer Festival in the company of some great friends, some brilliant brewers and some amazing beer.
Here you have it, a story with no real ending because I simply can’t remember it.
At least my internal homing device still works.

Thanks to Hop Hideout for inviting me and for Jabberwocky (@JabbarwockyShef) for making us so welcome.

One Response to Sheffield Indie Beer Feast, or Do You Have An Inbuilt Homing Device?